The first vegan mushroom leather handbag just made its runway debut as part of Stella McCartney’s Summer 2022 collection presentation at Paris Fashion Week. The Frayme Mylo bag is made from Mylo, a vegan leather made by startup Bolt Threads from fast growing mycelium (fungal root systems). Inspired by McCartney’s iconic Falabella bag, the Frayme Mylo features durable vegan mushroom leather that is wrapped in an oversized recyclable aluminum chain strap and embellished with a zamac medallion.

McCartney previously featured Mylo in a concept duo of pants and a bustier she created in her studio in London, which were made with recycled dive nylon and vegan mushroom leather inserts. While these garments weren’t for sale, McCartney expanded her summer 2022 collection to showcase the versatility and beauty of mushrooms, which McCartney says is the future of fashion.

“For my summer 2022 collection, I was so inspired by mushrooms and their incredible potential to save our planet – and the Frayme Mylo embodies that hope for the future,” McCartney said in a statement. “Our long-time partners at Bolt Threads and I have a common passion for material innovation and the launch of a luxury Mylo mycelium leather handbag is a milestone not only for us, but for the world. What you see on the catwalk today is the conscious fashion industry of tomorrow. 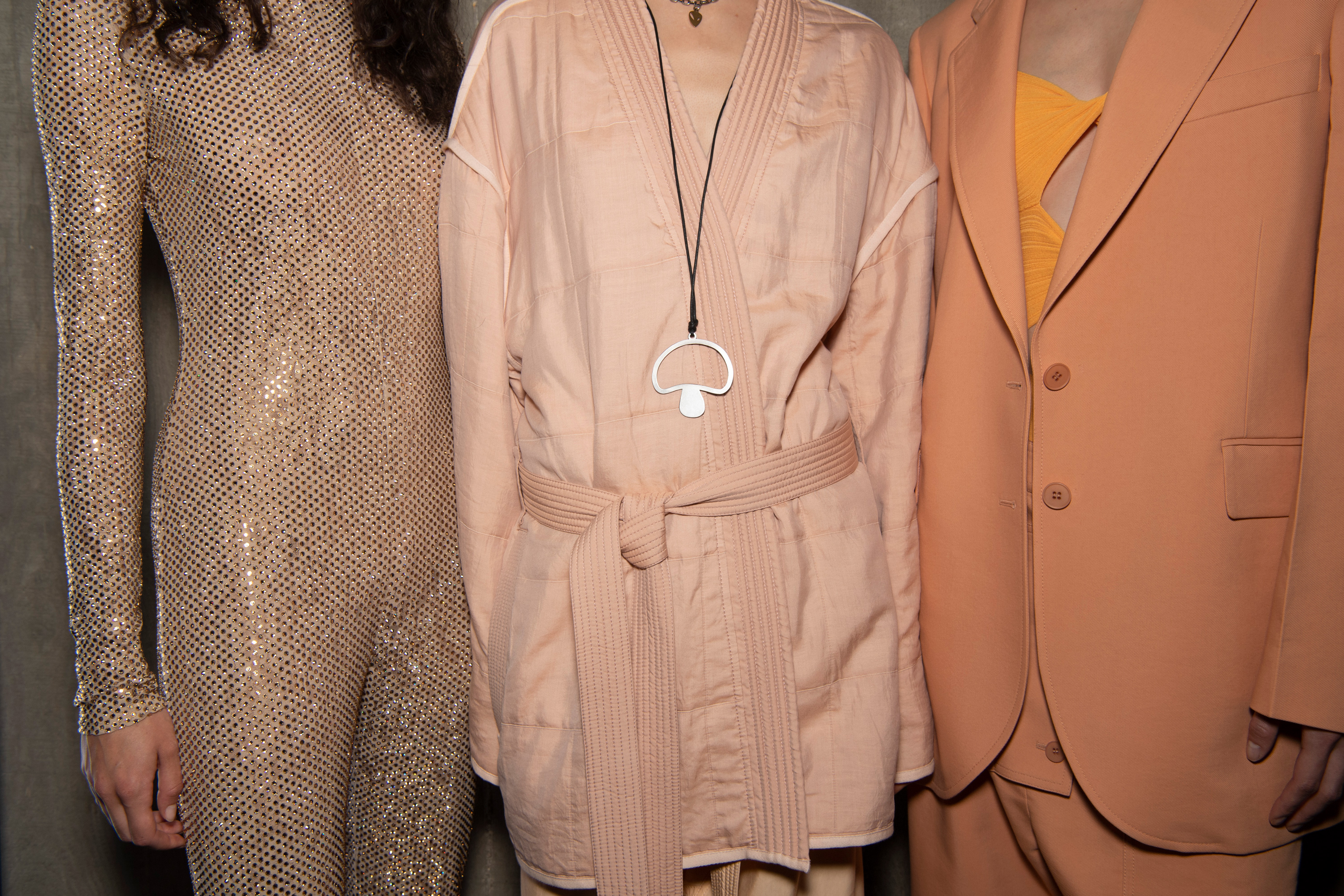 It takes 1,700 liters (approximately 4,500 gallons) of water to make one kilogram (approximately 2.2 pounds) of animal leather. Mylo is environmentally superior to animal leather in a variety of areas, including reducing greenhouse gas emissions and reducing water and land use. It is also made cruelty-free. While it takes years for cows to mature for their hides to be turned into leather, Mylo is grown in days and is endlessly renewable. Mushroom leather is also not petroleum based like many synthetic leathers, which helps keep more fossil fuels in the ground and deposit less plastic in landfills and oceans.

“With good reason, consumers demand sustainable material alternatives that also look and feel good. Working closely with Stella and her team of innovative designers has enabled us to make Mylo a no-compromise, animal-free alternative to leather, ”Bolt Threads CEO and Founder Dan Widmaier said in a statement. “The Frayme Mylo bag is a milestone for sustainable fashion, making better material options accessible to consumers around the world. “ 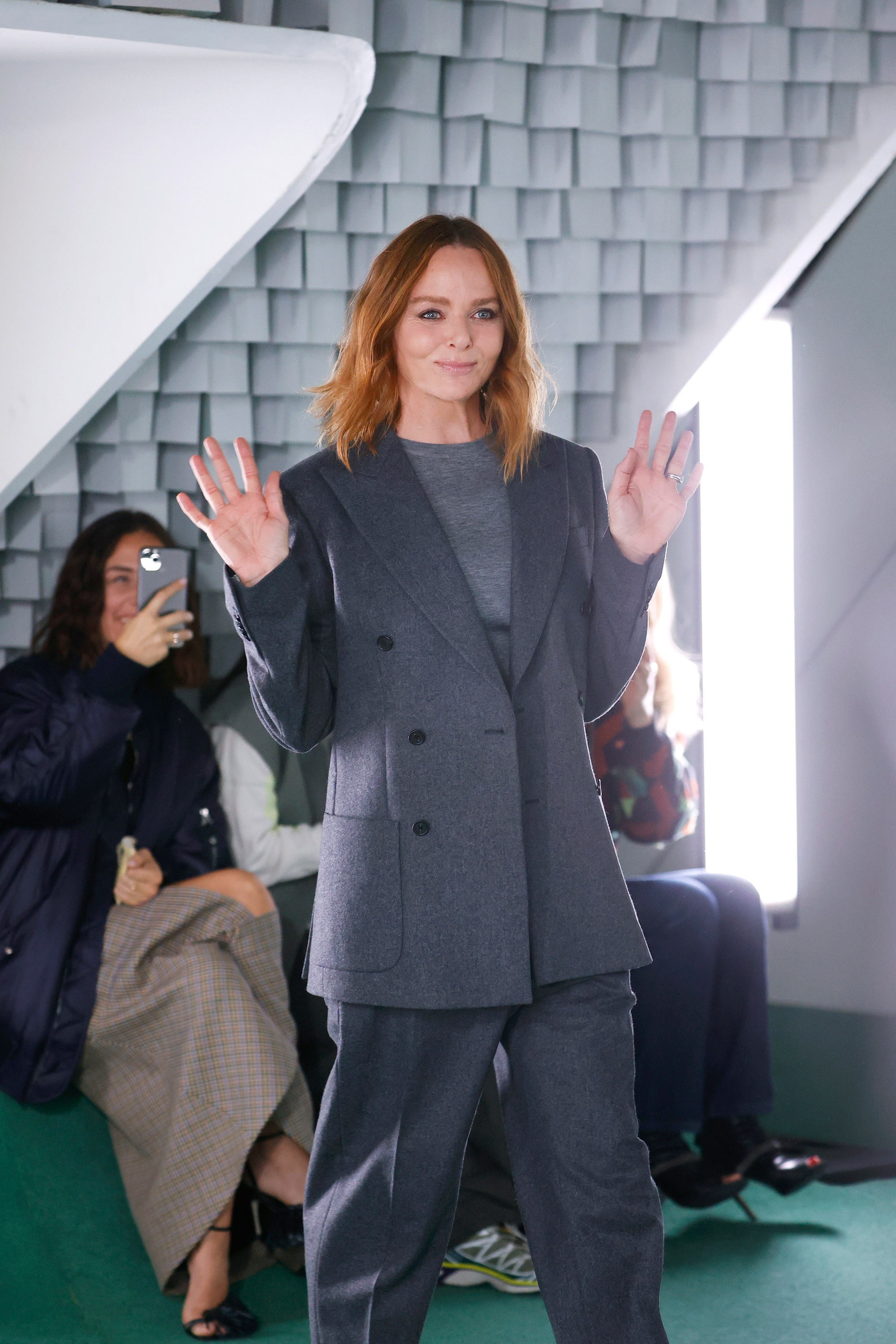 McCartney is the first to bring vegan mushroom leather to the catwalk, but she won’t be the last to present this trendy innovative material. The eco-responsible designer is part of the Mylo Consortium, a multi-brand collective formed last year with Bolt Threads which will result in the launch of several innovations based on Mylo in the coming months. Besides McCartney, the partners of the Mylo Consortium include Adidas, Lululemon and Kering, a large fashion group that has just given up on fur and manages the development of brands such as Gucci, Saint Laurent, Bottega Veneta, Balenciaga, Alexander McQueen, etc.

Last spring, Adidas released a Stan Smith sneaker concept made with Mylo that builds on the sports brand’s recent release of vegan leather versions of its classic sneakers. Adidas also plans to manufacture a commercial version of its Stan Smiths made from mushroom leather in the coming months.

While all vegan leathers surpass animal skins in terms of animal cruelty, new plant-based vegan leathers are being developed from various sources to replace the environmentally harmful polyurethane. Mexican entrepreneurs Adrián López Velarde and Marte Cázarez developed Desserto from cactus leaves and the innovative vegan leather is now making its way into the fashion world in the form of Fossil tote bags; a reimagined vegan version of Karl Lagerfeld’s classic K / Kushion bag; and even vegan leather boxing gloves from the sporty brand Sanabul.

In Italy, the wine industry is getting a lasting makeover thanks to Vegea, which makes vegan leather with its grape by-products. This luxurious vegetable leather has been presented by several brands, including H&M which last year launched a collection of shoes and handbags made with the innovative “wine leather”.

The luxury brand Gucci recently dived into the world of vegan leather by creating Demetra, a new material made from wood pulp. Developed over the past two years, Gucci’s Demetra is made with 77% plant-based raw materials, including wood pulp and viscose, and is tanned like leather would be, but cruelty-free. animals or damage to the environment. In June, Gucci released three styles of sneakers (Basket, New Ace and Rhyton) to present Demetra.

Pineapples are also made into vegan leather by Ananas Anam, maker of Piñatex vegan pineapple leather. Developed by Spanish designer Carmen Hijosa, Piñatex is made from pineapple leaves that could be wasted, giving vegan leather the same versatility and durability as animal hides, but without any of the downsides. Since its release in 2016, Piñatex has been used by major fashion brands including Nike, Hugo Boss, etc. Earlier this year, Dole Sunshine Company became a pineapple by-product supplier for Ananas Anam, a step forward towards achieving its goal of a more circular business by 2025.

These new luxury handbags are made from cacti, not cows

Anna Starostinetskaya is the Senior News Editor at VegNews and always monitors all things vegan in her hometown of San Francisco, California, and everywhere else.

Do you love the plant-based lifestyle as much as we do? Find out why VegNews is the # 1 vegetable magazine in the world by subscribing today!

Do you love the plant-based lifestyle as much as we do? Find out why VegNews is the # 1 vegan magazine in the world by subscribing today!