Original fonts with 0 and 8 evoking the shape of the case.

As Creative and Development Director, Philippe Delhotal oversees the manufacture of the simplest and most complicated Hermès Horloger timepieces. 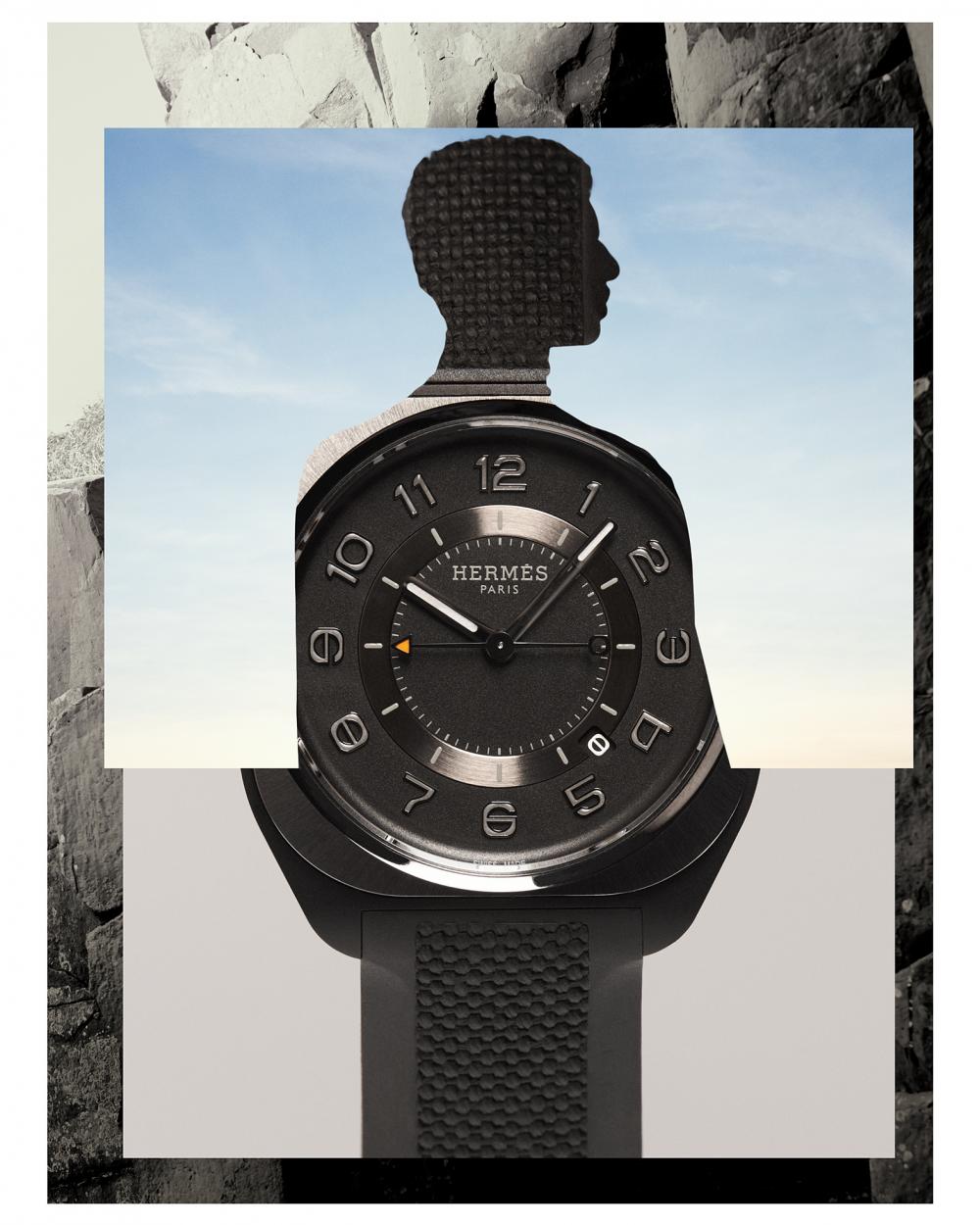 The creation and development of what he considers a simple watch can actually take several years. Finally, the Hermès H08 was unveiled in April during Watches and Wonders Geneva 2021.

One of the qualities of the new easy-to-wear model for men is its lightness, made by a titanium or composite case filled with graphene.

“Personally, I like to wear a watch that is lightweight, aesthetic and ergonomic at the same time,” said Delhotal. “The Hermès H08 is designed as a relaxed and comfortable watch. But the goal is not exactly to make a sports watch, but a timepiece that embodies the spirit of sport.

The design and development process has revisited Clipper since the early 1980s. Named after the quick and easy to maneuver three-masted vessel, the model featured a porthole-shaped bezel. In 2010, Hermès Horloger presented the iconic 44 mm Clipper mechanical chronograph housed in a titanium case.

Continuing the Clipper style, the H08 is a Hermès object that seeks balance, promotes dialogue between opposites and contrasts. Defined by its inherently varied and multi-faceted nature, it is serious and sensual, robust and delicate, matte and shiny.

“The main objective of the Hermès H08 is to achieve lightness and titanium is a very light material. Aesthetically, its color is warmer, and it is also hotter than steel when the watch is worn on the wrist, ”said Delhotal. The original fonts with 0 and 8 evoke the shape of the case. (Photo: David Marchon)

The versions with a case in satin-finished titanium or in matt black DLC-treated titanium feature a sun-brushed titanium bezel with mirror-polished bevels.

A more daring interpretation owes its robust but light case to the composite filled with graphene, while its satin sunray bezel and screw-down crown are in ceramic.

A form of carbon, graphene is a thin flake, one atom thick, while being the thinnest and strongest material with other favorable physical properties. Composite materials enriched with graphene have been used in various industries, from aeronautics and cosmetics to mobile and watchmaking.

The darker Hermès H08 features a black gold-plated dial with a finely grained center, a satin-brushed minutes disc, a gray transferred minute track, black nickel-plated hands, not to mention a date window between 4 and 5 o’clock. 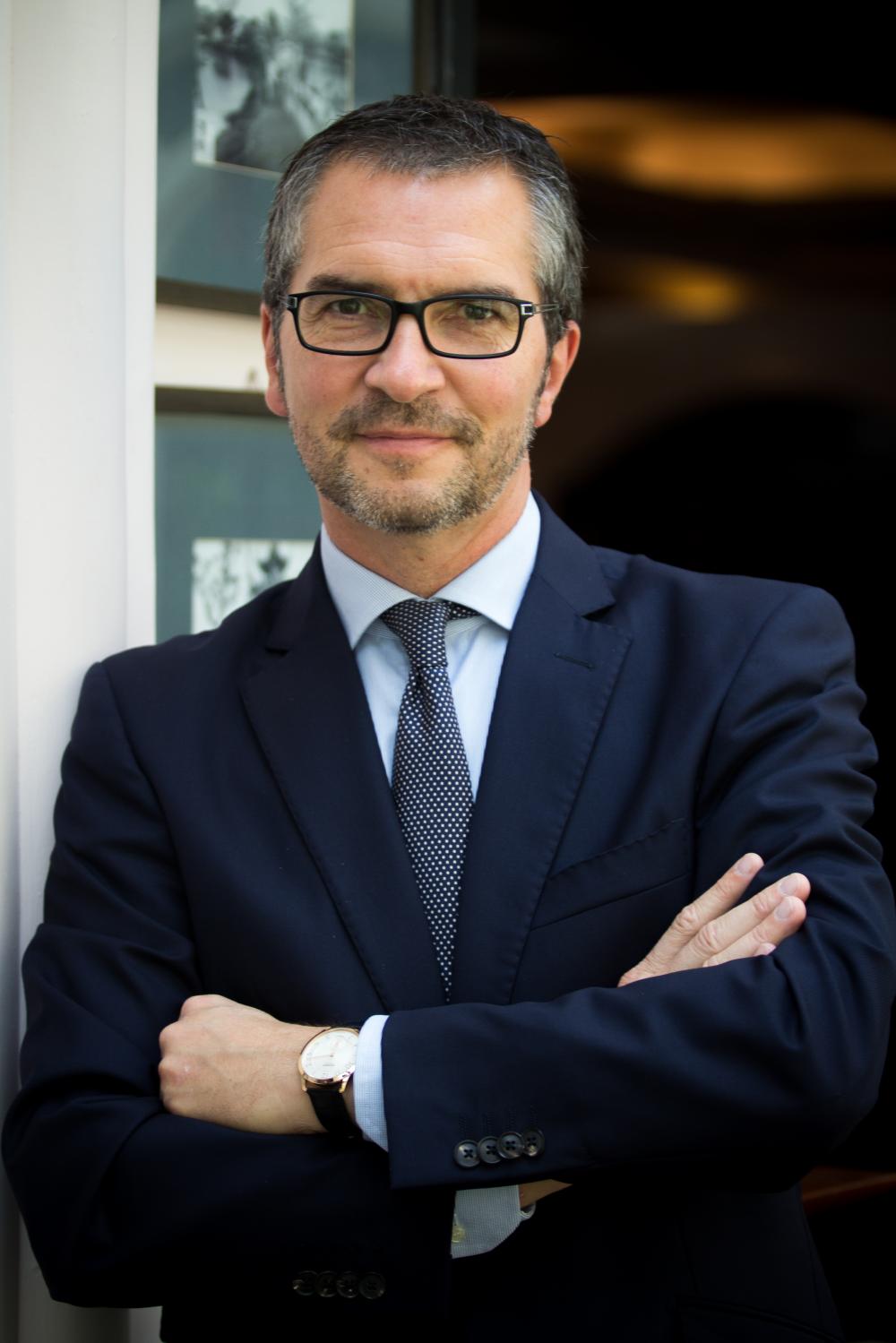 The circular dial of the titanium variants is distinguished by a black nickel coating and a transferred white minute track.

Enhanced with Super-LumiNova, the applied Arabic numerals express the brand’s penchant for creative typography and unveil the enigmatic name of the Hermès H08, which evokes graphics, mathematics and metaphysics.

“The numbers are designed to harmonize with the case and dial,” noted Delhotal. “The 0 and 8 evoke the cushion-shaped case with soft edges. The number 0 embodies emptiness, while the horizontal number 8 symbolizes infinity.”

The two figures philosophically represent the journey between nothing and everything, as echoing the mystery and the depth of time. 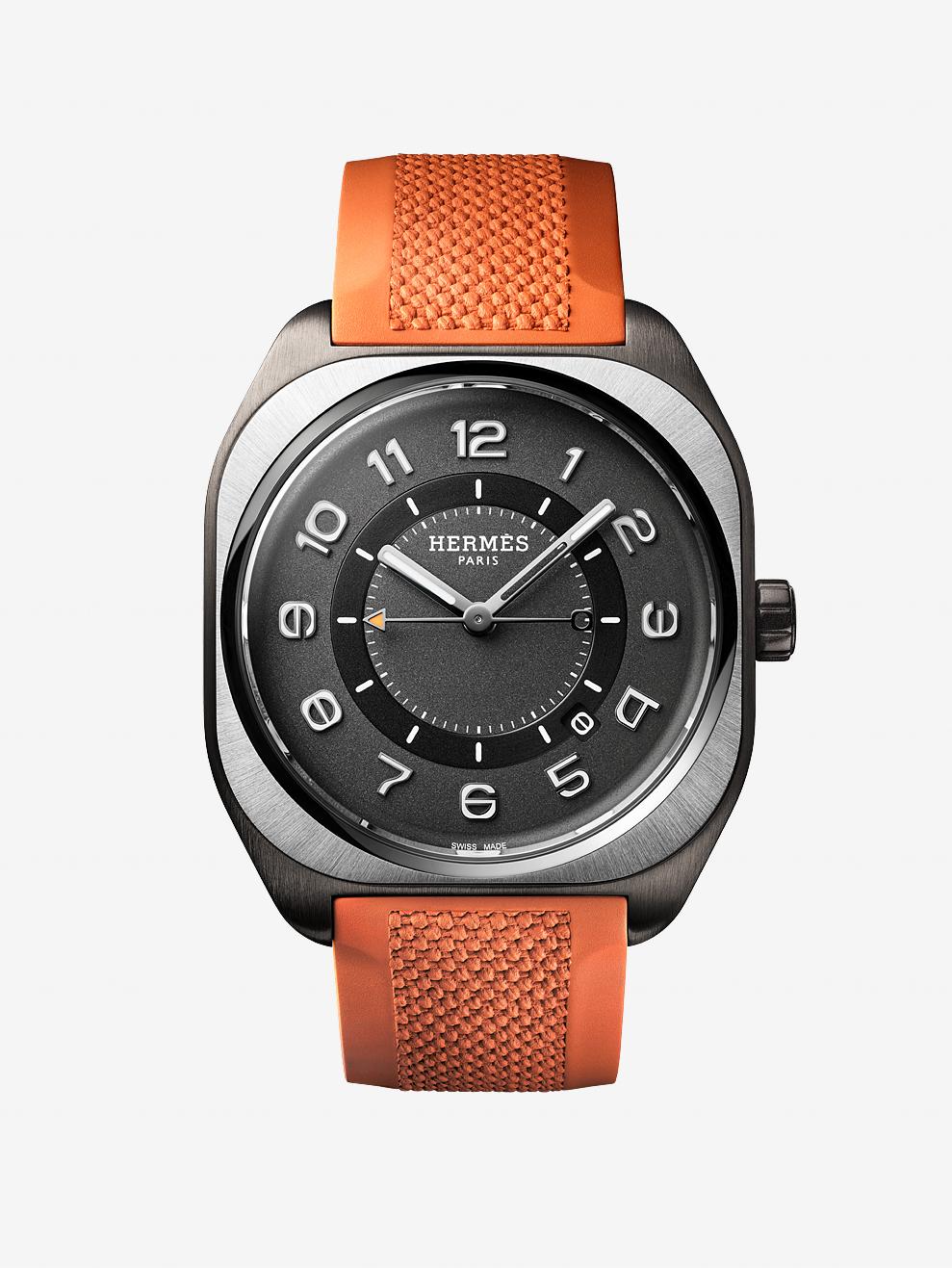 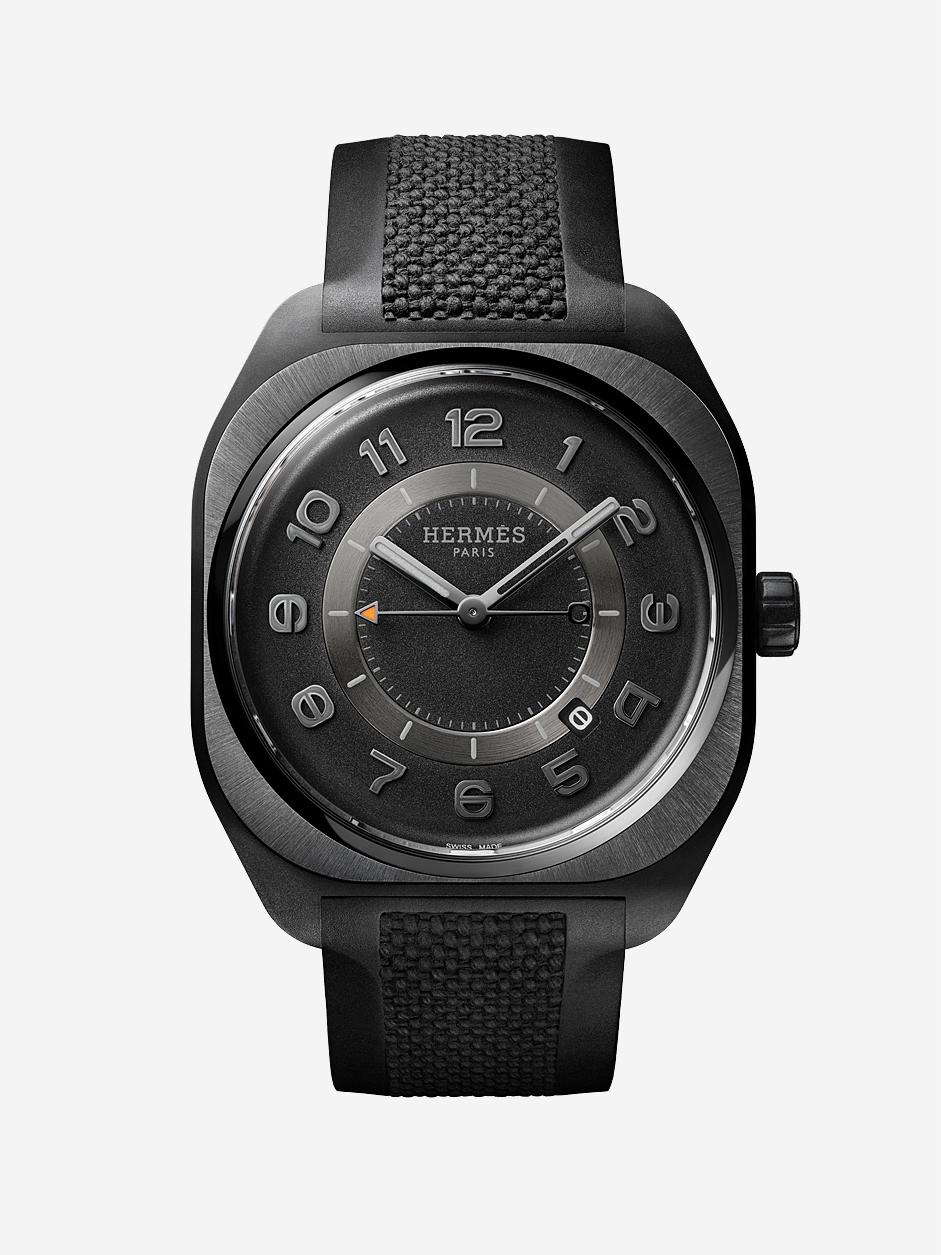 Hermès H08 in a rugged and ultralight composite case filled with graphene. The house’s journey into fine watchmaking began in 1912, when its very first timepiece with a leather strap was worn by fourth-generation Jacqueline Hermès, depicted in a photograph of the young girl with her sisters.

In 1928, its historic boutique at 24 rue du Faubourg Saint-Honoré in Paris offered the first Hermès timepieces fitted with Swiss mechanisms. The French luxury brand founded La Montre d’Hermès 50 years later in Biel, in northwestern Switzerland. The full-fledged watchmaker has a leather workshop for the manufacture of bracelets at its headquarters. Vertical integration involves Les Ateliers d’Hermès Horloger in Noirmont for the manufacture of cases and dials, while Vaucher Manufacture in Fleurier supplies the movements. 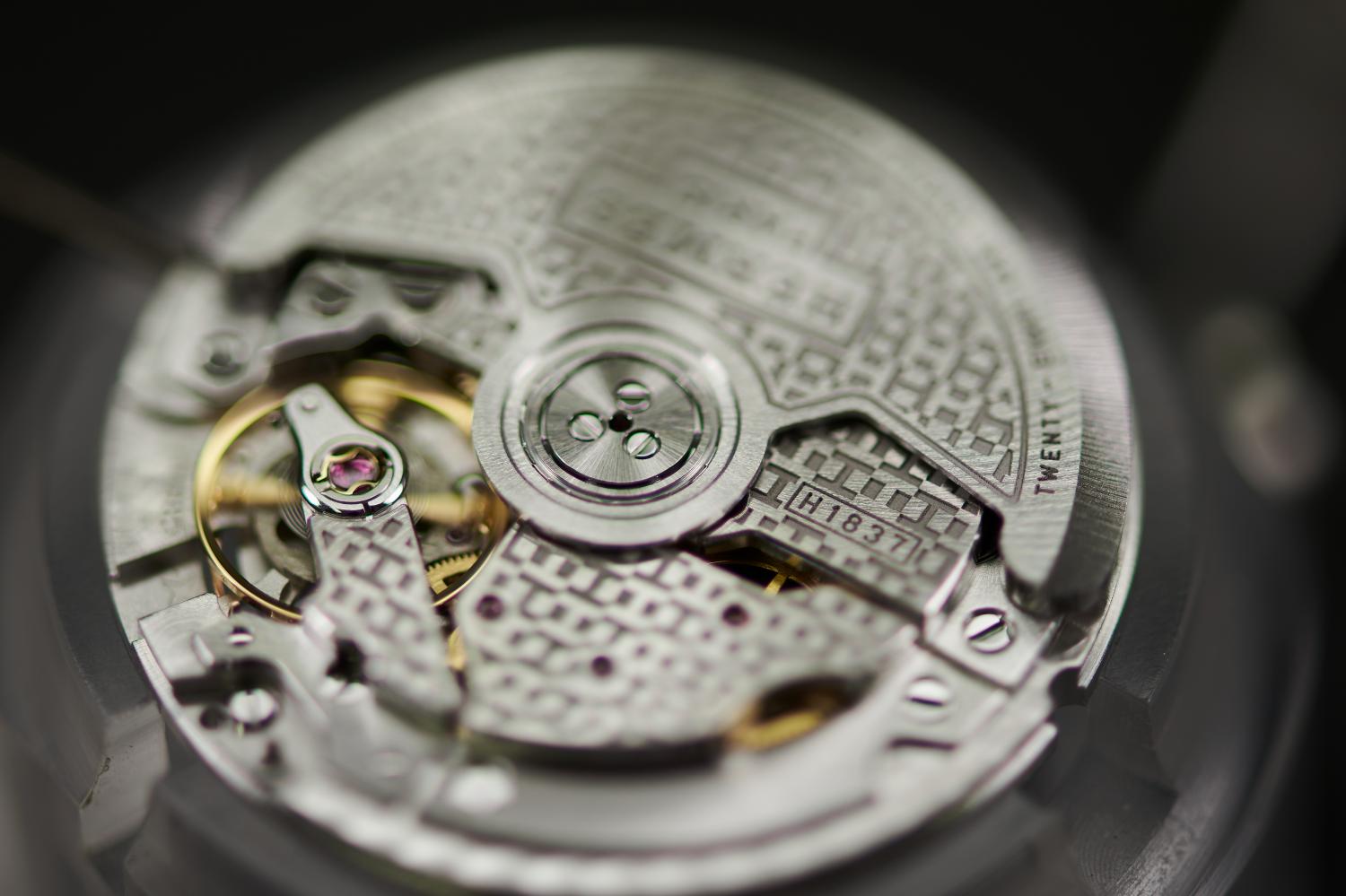 Water-resistant to 100 m, Hermès H08 watches are powered by the H1837 self-winding mechanical movement, a number referring to the year in which the company was created by the saddler Thierry Hermès.

The heritage of leather, however, was not applied to the making of contemporary watches.

“Leather can be fragile for some activities, which is why other materials were used to make the straps to achieve the wearable look,” Delhotal said.

“In addition to its robustness and comfort, the braided bracelet specially developed for the Hermès H08 watch embodies a style that is as sporty as it is sophisticated, in total coherence with the world of Hermès men’s fashion.